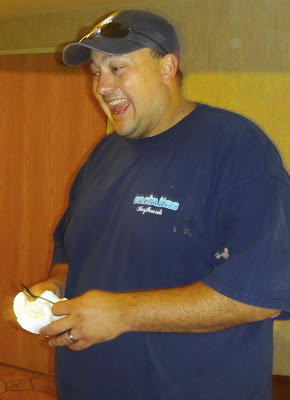 It's my Brother Mark's Birthday :) 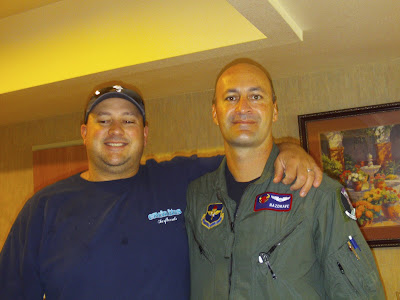 Posted by Unknown at 6:49 PM No comments:

So today has been very musical thus far. Mara has discovered a recorder and is playing along with the radio with occasional singing mixed in. Resa has abandoned her favorite hobby, trying to eat the toys Mara is currently playing with, and decided to take everything off the bookshelf and put it in the middle of the hallway. Resa seems to be getting around on just two feet more and more these days. She's not walking yet but she will lean on the wall to go down the hallway if she doesn't want to hold onto the book shelf.
Posted by Unknown at 2:11 PM 1 comment:

So, I haven't updated in awhile but I've been lazy. But you only show up to the blog for pictures and videos anyways.

What's been happening with me you may ask. Well nothing really. But my cousin on the other hand, she just got her Doctorate. (Now that was a fun party and how many people can say that they have a doctor in their family) My brother Casey flew into town for the graduation and that was cool because I haven't seen him for so long. During the whole weekend I almost always saw him holding on to someone's baby. It was kinda cute.

The day after the graduation I took Mara to the zoo. (I know what your thinking...'Again') It was really fun because it was just me and her for a couple of hours with Theresa sleeping at home with Tim. I decided to get a 'Wild Pass' for me and her. It was so cool because it gives us unlimited train, camel, and carousel rides. Since it was just me and Mara, we actually got to ride the camel. (Resa is not old enough.) Later in the day when Tim was out with his friends I took the kids back to the zoo and went on the train ride and it was pretty cool and informative. I'd never done that before. And naturally we ended the day with the carousel. Mara got really excited that we were going to go on it. She had never gotten to go on the zoo one before. And after that was all done she was really happy. Then we got on again. Pure joy is visited upon the 3 year old. Theresa just loved it to. She wasn't too sure about it but when it started she just held onto the pole for dear life. All told we went around on four different trips around.

After that was all done we had good naps and Mara woke up around the time that it started raining. It was pouring down so hard that our yard flooded and the street we live on turned into a mini river. We made cardboard boats and sent them sailing down the street. (I got the idea when I saw a pink laundry basket go floating by.) Mara also got to put on her rain boots and splash in all the puddles on the way to church and back. It had been so windy just before that a tree had fallen onto the sidewalk. (It was a small tree.)

THE REST OF THE WEEK:

Rachel had her birthday party at a little gym. She turned 3. There was a lot of tumbling, jumping, and balancing to be had. Pictures and video soon to follow. After a very active time I have brought both kids to parent's night offered by my church. As of writing this I am without children and so I am writing about them.
Posted by Unknown at 6:20 PM 1 comment: